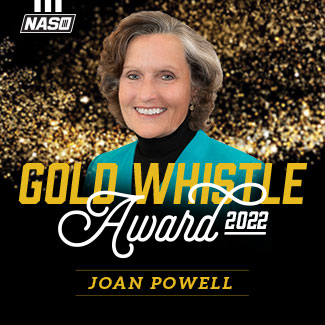 RACINE, Wis. — Joan Powell, coordinator of volleyball officials for the Pac-12 and Mountain West conferences who has made a profound impact on volleyball officiating for decades, will receive the 2022 Gold Whistle Award, presented by the National Association of Sports Officials (NASO). The award, the highest honor in officiating, will be presented in Denver, Colo., on Tuesday, Aug. 2, during the Celebrate Officiating Gala, sponsored by Fox 40 International. The Gala caps the 2022 Sports Officiating Summit.

“Just look at all she has accomplished and in a way that causes so many to revere her integrity and enthusiasm,” NASO President Barry Mano said. “She has and continues to shine such a positive light on officiating and on the leadership path for officiating administrators. The selection of Powell as the Gold Whistle recipient was an easy one.”

Powell was the first person to be named NCAA Coordinator of Volleyball Officials and held that title from 2011-15. She has served on the USA Volleyball Board of Directors. She traveled in 2008 with the Women’s National Team as team leader to the Pan Am Cup, the World Grand Prix and to the Olympic Games in Beijing. She was also a five-term president of the Professional Association of Volleyball Officials (1996-2010). She earned the Big Ten Whistle of Pride Award. Powell also received the 1989 Women’s Sports Foundation Award for dedication to women’s sports. She was the 2018 recipient of the Harold T. Friermood “Frier” Award, USA Volleyball’s lifetime achievement award.

Powell served two terms on the NASO board (2001-05, 2011-15) including serving as secretary. She continues to serve on NASO committees and is a popular speaker at the NASO Summits.

“For years, I have been attending NASO Summits,” Powell said. “Highlights include program sessions and presenters, meeting new and old friends and, above all, the Gala, where the industry’s prominent leaders are recognized. To be included in this prestigious group, representing volleyball, is the highest honor. Thank you, NASO, and thanks to all of my former officiating partners, assignors and – above all – my family.”

Fox 40 International is the premier producer of officiating whistles. The complete line of Fox 40 products includes whistles for all uses, whistle attachments, Fox 40 gear, pro coaching boards, mouthguards and marine & outdoor products. Fox 40 continues to invest in new technology, designs and machinery, resulting in many new products being launched each year. Fox 40 has sponsored the Celebrate Officiating Gala and the Gold Whistle Award for more than two decades.